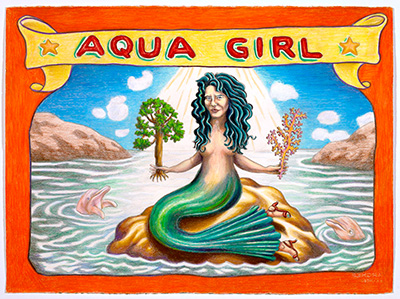 “Poseidon . . . begets . . . a daughter with a secret name.”
–The Oxford Classical Dictionary

After the storm destroyed the boat, shreds of flotsam ornamented the Pacific Ocean like the roses priestesses once threw into the waves to pacify the temperamental water god. A woman’s red shoe and a marigold-colored life vest floated alongside a tangerine fragment of a lady’s shirt, which expanded like a jellyfish before sinking down forever into the deep.

A girl infant laughed as a miraculous whirlpool buoyed her through the seaweed and the sharks. Back and forth she sweetly rocked in Poseidon’s cradle.

The Old Man, well-satisfied at his act of redemption, stretched his blue arms toward the child.

Come to the water, my little girl, he sang.

Nothing can harm you in the Sea.

He had taken the creature from her mother, a stubborn worldling who wished to keep the girl safe from his deadly ways. Yet he’d not killed the woman or saved her offspring out of any soft feelings, as he only harbored disdain for mortals who were fated to die in pain and fear. Rather, he had snatched his daughter from the brink as his possession. This was as it should be: The Lord of the Waters wasn’t known for his tenderness, but had made his name for brutality, as the fishermen and lifeguards know.

Thus it was with the deepest shock that this god felt a sliver of warmth enter his cold heart when he wrapped his arms around the girl, who was half-blooded, and so doomed to a short life.

Poseidon the Terrible looked into her face and fell in love.

Twenty years later, a young woman with cobalt streaks in her black hair appeared on the empty expanse of Santa Monica Beach. She had a queer accent and an unpronounceable name, which she told strangers meant “The Thief.”

“My father named me,” she would laugh. “He says I’m wicked. But he’s taught me everything he knows.”

All of this was true.

The Old Man of the Sea had instructed his mer-child in the mysteries of the world, which are written in the great book of the ocean. He had tutored her in the secret alphabet encrypted in coral, and of the dire prophecies that are written there. In that red, tangled text she read of the exquisite deaths of kings, of the collapse of nations and of the last, horror-struck moments of every brand of mortal, such as centaurs and fisherwomen and giants.

She turned from these stories and tried to forget them.

She much preferred her other lessons, such as the spells that would bring the dolphins under her command and make the whales fetch her offerings of silver minnows that she wore in her hair like diamonds. And she liked best to lie on her father’s broad, cold body to drink the love straight from his heart while he sang to her of the aquamarine girl who conquered the most powerful god in the history of time.

This siren was not content, however, to steal the affection of Poseidon the Terrible. She would look out over the expanse of the ocean, at the land where her murdered mother had once walked. There the sand was littered with desirable men.

She swam to the shore, wearing a dress made of the opalescent scales of fish, to whisper her occult name in their ears.

Five husbands followed her back to the sea.

The majority of her lovers were sailors who bragged that they knew the water like no other. So on her first four honeymoons, she ran to the shore, dropped her glimmering robes and charmed them into the chilled embrace of her father.

Down, down, down she swam, like a dolphin, like a devil, taunting them to match her stride. They all failed her test. The air flew from their mouths like pearls. At the onyx bottom of the ocean, she would turn around to see her drowned grooms made into puppets by the current, and their melancholy faces lit by the phosphorescent fish.

“You see, no one can love you like I do,” the Old Man would say while she wept.

The fifth marriage, however, was to a carpenter. He loved trees and could barely swim, but when she told him her name, he whispered it back into her mouth and it tasted like smoke on her tongue.

“I don’t like the water,” he said on their honeymoon, just as the tides were rising in her blood.

“Come into the ocean with me,” she begged. “I know you’re the one.”

He saw the monster in the slits of her eyes. Within a month, he had abandoned her for a woman who was as agnostic toward the ocean as he. And in turn, the aquamarine girl renounced her father and raced after the carpenter, to the cities.

The Water God’s wrath that year was terrible. The hard rain washed away the hills; floods flashed through the streets. Houses slipped from the cliffs, and a dismal mist hung over the towns. It was only through his daughter’s knowledge of the darkest sea-spells that her lover and his new family survived.

To forget her heartbreak, and do penance for her crimes, Poseidon’s daughter ran away to the valleys, where water is harnessed and runs through faucets at its masters’ beck like a slave.

She became a teacher at Harvard-Westlake. Her webbed feet were stuffed into leather shoes like a mortification while her shining breasts were trapped in a girdle of unnatural cloth. In this jester’s costume she taught children about the secrets of the water.
Charles Darwin sat upon my father’s knee and drank his tales like mother’s milk, she murmured to them. Once I loved a man who had a mind made of trees. No harm can come to me in the sea. In one thousand years, California will float to the bottom of the ocean and be danced upon by undines. And the coral says… the coral tells…

By the green light of her classroom’s aquarium, she told her students of the agonizing ephemerality of all life and the inevitability of heartbreak. The truth floated from her mouth like the oxygen pearls once spat by her grooms, and as the children listened, their eyes widened, then watered.

But not even the most powerful chieftain of the school could remove the aqua girl from her lair. At the slightest threat of termination, the swimming pool would boil, and the school would tremble violently at its foundation.

The administration had to wait 80 years until Poseidon’s daughter retired from her post.

At the age of 108, her hair had turned completely blue, framing a face that had the wrinkled aspect of a bather who has stayed too long in water. She closed her eyes to listen to her heart. Instead of a drum-like beating, it sounded like the breeze inside a conch shell. This was an unmistakable signal. She knew that she would not live much longer.

It was time to see her father again.

When the Old Man of the Sea spied his daughter walking toward him on the cluttered beach, past Santa Monica’s sun-worshipers, the kiosks, the tents, the fish shacks and the T-shirt vendors, he roared in grief as well as happiness. He had read in the coral of what would happen next.

The girl he had called “The Thief” stood for a while on the sand. Slowly, she removed her jester’s costume of shoes and dress and girdle as Poseidon threw a storm so the other humans would flee. Father and daughter would have privacy in their final hour.

She kneeled on the shore. She drew runes that spelled out her mystic name in the wet clay. When she finished her meditations, she looked up at her glorious patriarch and the murderer of her mother. She began to laugh at her own foolishness.

I killed those men because I am my father’s daughter, she thought. I was born a monster with a carnivorous heart. I loved a man with a mind made of trees because that is also my nature. As it is my nature to–
She realized then that she had fled the ocean not only in penance, but also because of the terrors written in the coral’s sign.

Thinking back to the stories of the exquisite deaths of kings and the violent ends of fisherwomen, she walked to the water. She swam across the chest of Poseidon the Terrible. She cupped her hand and drank the love from his shuddering heart.

Come to the water, my little girl, he sang.

Nothing can harm you in the Sea.

And she was surprised when she died. It didn’t hurt.

Slowly, slowly, she dissolved into the breach. Her blue hair mingled with the waves. Her turquoise thighs bubbled into the foam.

Whether mortals have a soul is a mystery to all, except the gods. Still, if we do have a spirit tucked within these bones, it is certain that the psyche of the aqua girl spread into the ocean. Shining specks of her anima were swallowed by the eels. She fertilized the salt waste with her violent appetites and her desires for beauty.

When you enter our ocean, then, remember that you are bathing in consecrated water.

Remember also that the sea god’s grief is unabated. The Thief took his heart with her when she died.

Even now, he is gazing on the women who dip their beautiful feet into his lap. He will tempt them with a song, perhaps. It is certain that he will lure them down into the ocean, far too deep for any human being to swim.
So recall the grooms, their faces lit by the fish. Do not forget the marigold life vest, the red shoe, the half-orphan cast adrift.

To the surfer girls who feel a tug at their legs, the swimmers who hear a melody in the waves:

Follow the example of the carpenter, who fled the ocean’s temptations. Otherwise, at any moment, you might be chosen to bear the Old Man another daughter. Do not succumb to the warm water on your thighs. He is dangerous. Poseidon the Terrible would perform any trick, snuff out any life, to replace that mer-girl he loved, that penitent monster he burns to hold in his cold arms once again.