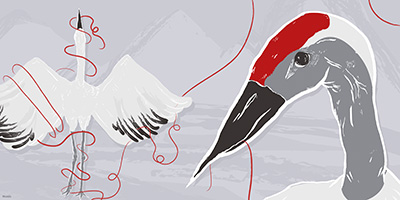 Watching him unravel the knotted yarn, Yuri sat next to her grandson Joshua. She grabbed her needles from their perch in a weave of wool on the patio table. She couldn’t help but think how Frank, Jr., her CEO of a son, would react to Joshua’s secret hobby.

Yuri dismissed the thought and focused instead on the work of purling a double-knit pattern. Her long white needles fished in and out of the red and blue yarn, like mother’s painting of two red-crowned cranes dipping their beaks into the marshland shallow of Hokkaido in northern Japan. Her mother gave up those paintings when their family was forced out of their home and into the Tule Lake Internment Camp.

The memory dragged black pearls of pain to the surface, pearls that had been buried so deeply they startled Yuri. Those were dark days for America. Dark days for me. Images flooded her mind. Buses loaded with her family and friends, hundreds of Japanese leaving their homes and neighbors, barbed wire fences, and the redundant smell of boiled potatoes that perfumed walls of the mess hall three times a day. Tule Lake Internment. Why was it called Tule Lake? Where was the lake? She remembered only dirt. Dirt everywhere. No matter how hard she fought it, Yuri couldn’t stop one memory from rising to the surface: her mother’s face streaming with tears. It was the last day she’d seen her mother alive.

Yuri closed her eyes and let the old wounds be soothed by the trickling sounds of the fountain and the scents of nearby lemon blossoms. Why didn’t she just accept my choice?

“What’re you making, Baachan?” Joshua’s voice shifted so high and low it could have been a passage from a Dvořák concerto.

Yuri glanced at him side-eyed and smiled. “A coffee cup holder.”

“My neighbor burns himself every time he goes to Assad’s Donut Shop.” Yuri laughed. “He likes to blame the shop’s owners instead of taking responsibility for himself.” She shrugged. “I feel sorry for the bastard.”

“Language, Baachan.” Joshua twirled his yarn around his needles, raising an eyebrow toward her. “But it is cool you’re trying to help the old dude.”

Yuri nodded and smiled, but her thoughts drifted back to her memories again. Salt air fluttered through the breezeway, bringing exotic scents of cumin, coriander, and cardamom. She checked her stitch. “I’ll bet you’re glad school’s back in.”

Joshua shrugged and frowned. “Not really. The guys at school are jerks.”

She scratched her head. Her short-cropped hair was gray. “How so?”

“I don’t want to talk about it.” Joshua’s eyes darted around as he took a deep breath. “They’re all trying too hard. Ya know, to be tough and stuff.” His needles sped up, becoming choppier as his brow furrowed. “I’m sick of them judging me!”

Yuri wondered what these kids said about her only grandchild, her crowning joy, the spitting image of her rebellion against her parents’ biases. What did the kids say about this beautiful boy with the russet skin of her deceased husband and the dark eyes of her father? He was so empathetic, a truly sensitive soul, crying whenever anyone got upset or injured.

Yuri wanted to ask him more, but worried that he’d end the conversation. Instead, she focused on knitting. “What are you making?” she asked, hoping he’d ask her advice about the boys.

“A scarf.” He made several double-knit stitches. “I’m not what they think,” he added.

Yuri recalled her son’s accusations about Joshua’s “eccentric” behaviors, like the time he caught Joshua wearing nail polish. She had brushed it off as experimentation. The polish was black. Meaningless, no? Now she wondered if Joshua needed to share something. She eyed his colorful yarn and bit her upper lip. Should she just ask?

If her grandson was struggling with that, she could certainly understand. She’d had to deal with her own parents’ disappointments. She pictured her mother’s face. When she’d told her mother about Frank, Sr., she did not find an empathetic ear. Her mother’s response had felt like a sucker punch.

“But how can you reject him just because he’s black? Remember how we felt living in Tule Lake? You cried yourself to sleep every night—I heard you, I heard you question why they’d treat you this way just because you were Japanese.”

“Shut up!” Her mother had shaken her head, rejecting her words. “It’s not the same. We work hard, we have noble history. We were never slaves or lazy like them.”

“Lies—just like the lies that were said about us!”

“I refuse to let you do this.” Her mother inched closer, clasping her hands together. “Do not do this. You will bring shame to our family.”

“But I love him.” When the declaration had failed to loosen the tightness in her mother’s frown, Yuri had stepped back and straightened her shoulders. “I am a woman now. This is America. I can make my own choices, and I choose to marry Frank.”

Even after sixty years, Yuri’s heart still raced as she recalled how her mother’s face turned white, like a painted geisha, tears cascading down her cheeks. “Then get out! Get out now!” Her mother snatched up Yuri’s clothes and belongings from the floor, shoving them into Yuri’s chest, punching her daughter as she did so. “You are dead to me.” Venom. Poison.

Yuri glanced at her grandson. She had never healed from her mother’s restriction, society’s interference with her love, her husband’s love. Frank had never healed either. She’d watched him struggle and eventually succumb to those pressures.

Maybe it was not her place to pry. She wasn’t even sure how best to broach the subject. She decided to let it go for now. “They’re just haters. Right?”

Joshua laughed. “Yup. I think they wish they could be a free spirit like me.”

Yuri nodded. He’d inherited that personality from her—unless “free spirit” meant something else these days? She peeked at him from the corner of her eye, wondering how to phrase the question.

He paused his knitting to brush away his bushy curls. “Also, it doesn’t help that…” A flush brewed up on his cheeks. “I—well, the hottest girl in school likes me.”

Yuri’s laughter rose from her belly and exploded from her throat. She covered her chest. Joshua’s eyes widened, and he tilted his head to look at her, his cheeks a deepening red. His reaction only made her laugh harder.

“I thought you were going to say—oh, never mind.”

Joshua tucked his chin to his chest and pretended to focus on knitting. Yuri bit back her laughter until the chuckles could be contained behind her smile.

After several minutes of quiet, Joshua spoke again. “That’s who I’m making this scarf for.”

As Yuri nodded her appreciation, she noticed Frank, Jr., standing at the sliding door between the house and patio, glaring down at his son. She studied his face, trying to decipher the emotion. Was it anger? No. Contempt? No. Then she recognized it: one eyebrow raised, three rapid blinks, two quick clicks of the neck. Baachan Yuri sucked her teeth in defiance. It was an expression as familiar to her as rain.

Glancing up, Joshua saw his father and leaped from his chair, still holding the two sticks and pink and green yarn. His father rushed over, knocking the needles from Joshua’s hands.

Yuri rose from her seat. She’d seen such ugliness too often in life—when Jews were slaughtered by the hundreds of thousands, blacks beaten on the streets of Montgomery, Alabama, even her own family caged like wild animals.

She scowled at her son. “Who taught you to behave this way? How could you have turned into such a frightened man—a frightened boy?” She poked him in the chest to punctuate her words. “You will not pass that fear onto my grandson.”

Frank, Jr., opened his mouth to speak, but Yuri cut him off with a wave of her hand. She stepped closer, so only her son could hear her words.

“You of all people should know better,” she hissed. “After your father was beaten like a dog because people were frightened. They busted his jaw because they were frightened, and it stayed with him for the rest of his life—a life that should have been much longer, but he lost all hope, said people would never change, thought the only escape was taking his own life.”

She wiped another tear before it could fall, then grabbed the knitting needles, still stuck in the pink mess, and handed them back to Joshua, her eyes burning confident and strong. “These belong to you.”