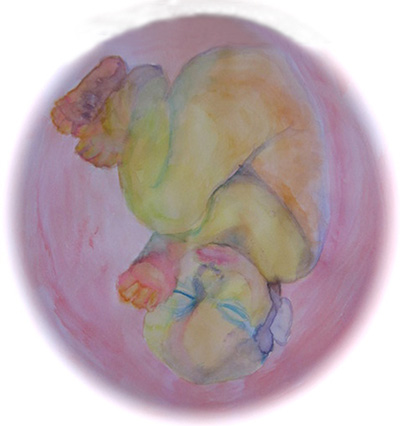 So here’s what happened. My son Silas died in my arms when he was just two days old. Two days. Two fucking days. He died because my wife almost died when she was pregnant with him. He died because he wasn’t born with enough blood in his system. He died because my wife had a ruptured aneurysm that no one knew about until it was too late. Too late for him, and almost (and I mean we’re talking entire-blood-supply almost, most of it on the operating-room floor instead of inside my wife or my son) too late for her as well. It was almost too late for her because her blood was leaking out of her circulatory system, and no one knew. That is, life was draining out of both of them, and no one had any idea. You could feel it going wrong, in that panicked feeling you sometimes get in dreams—like where you want to run away, but you can’t get your legs to move more than a teensy slow bit at a time. And so there I was, in a sterile “meeting” room set aside for us. Set aside for us to attend to our son’s death. Who ever has to schedule their child’s death? There I was in this room in the ICU, with my lifeless son growing cold in my hands, and my wife—my son’s mother—just days from losing her entire blood supply, there with me, but in pain. Just days away from a second surgery to retrieve a sponge they’d left inside her—she’d bled so much and so fast they’d packed her full of 81 sponges to stop the flow of blood, yet somehow only remembered to count to 80. So there’s my wife in pain, not just psychological pain (of which, [much] more later), but physical pain too. Her legs so bloated that she could barely stand to even sit upright and watch her son die. It pains her now to remember she had to ask to go back to her room because she couldn’t sit any longer. The only thing making sitting possible was a steady IV drip of Dilaudid.

Dilaudid? Isn’t that what Burroughs waxed poetic about in Drugstore Cowboy? This, my friend, will earn you an indulgence? My friend, where’s my indulgence? After living through this, I’m convinced I’m owed one—maybe more than one.

So there I am with my son dying in my arms. Dying? Can we really even call it that? I mean, he was brain-dead from almost minute one. I watched the ultrasound, the diagnostic test that precipitated the chain of events. I watched him barely move over the course of 30 agonizing minutes—the only thing you could really see was his little, tiny heart struggling to keep going. I watched and wished that with each thump of the ultrasound wand on my wife’s swollen stomach and with each additional bit of orange juice she drank, that he’d perk up, that he’d wake up, that the resident wouldn’t turn and walk quickly out of the room without saying anything to us. (Anything? At all? Not even to say, Well, here’s the deal. No! They didn’t know the fucking deal—that’s the worst part. No one knew. I think back over and over, Where could this have gone right if only we’d made a different choice?, but it’s a rathole that never ends the way I want it to).

I watched that whole procedure with some hope that this nightmare would soon come to a normal end. That it would end, and I wouldn’t be the person sobbing openly in the lobby of the ICU, so far beyond caring what passersby thought. (This is me—someone perpetually frightened to show my true self, to give others a glimpse, to be caught exposed. This is me now, riven with grief. This is me laid bare, realizing that here is my baby boy, he who is of me, he who is adorable and beautiful and almost perfect, here is my baby boy who won’t get a chance to live.) That the nightmare would end, and I wouldn’t be the one holding my son—my son— watching the neonatologist as he confirms with a nod of his head that my son is dead. That I wouldn’t be the one people would console and say kind things to, like Well, it’s better this way, than at an older age. (And by the way, that is total bullshit; and unless it’s happened to you, you have no idea [and I pray it hasn’t happened to you]; and if it hasn’t happened to you, at least say something useful. Or if you don’t know what to say and are totally freaked out by it, just say something kind. To be human is to live and die, to experience life and death. You will know death in your life—I can promise you that—and when you do, even if it’s expected and somehow easier, you’ll wish for people to say something kind.) That the nightmare would end,

and I wouldn’t be the one who caused my normally stoic 92-year-old grandmother—my grandmother who at last count has outlived two husbands, three siblings, two parents, and now one great-grandchild—to break down in tears at her great-grandson’s funeral. That I wouldn’t be that guy, the guy whose story is crushing to hear. That I wouldn’t be the guy with a secret that I’m always calculating about. Do I tell you, and risk freaking you out or making you run away? Or do I not tell you, and by hiding, continue to freak me out? Do I smile and nod when you say, Is this your only child? Do I prevaricate when you say, Only child? Why, you really should have more than one. You really should give her a little brother or sister to play with.

What do I say when you ask?

This loss is tattooed on my soul—it is indelibly part of who I am. But if I can’t tell you, if you won’t even listen, then what will you really know about who I am?