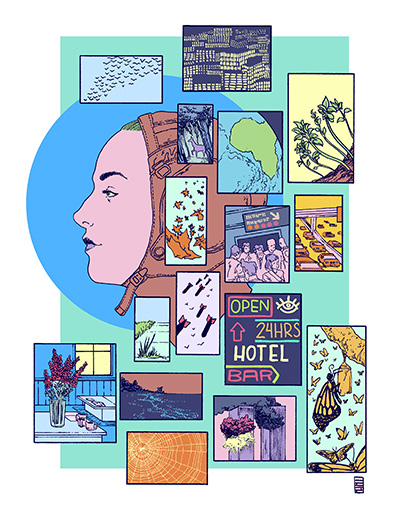 It would take her signal one-and-a-half milliseconds to reach Mission Control in Houston, which was a short time, by all means. After all, not a thing can travel faster than electromagnetic waves; it would take the flight controller’s brain thirteen milliseconds to even process what he was reading when her signal arrived. Likewise, it would take the light reflecting off of the Earth one-and-a-half milliseconds to reach the space-station window, and as she thought this, Jamie Fisher turned to see that the Sun’s light had just begun to reach over from behind the Earth, a gentle blue tint glowing from the darkness of space. It reminded Jamie of a bluebird’s egg.

She watched the sunlight spread, and she wanted so desperately to be warmed by its gentle rays. That was the only thing she craved after spending four months in space: the soft caress of sunlight on her skin. The space station’s temperatures were perfectly regulated; she never shivered and she never broke a sweat, and sometimes, zipping herself into a cold bed and breathing in the antiseptic air, she felt like she was living in a morgue.

The weightlessness, however, had taken no getting used to at all. It felt more natural than did being grounded, and the thought had occurred to Jamie that perhaps our bones are aching to float again, like we once did in the womb, or earlier, before we ever touched the sand. After all, everything alive came from the ocean, and we can still taste the salt when we cry or when we bleed.

The Sun had spread further now, and she saw what seemed to be the coast of Africa, perpetually beaten by the waves but still strong and curved like a woman’s hips. She didn’t really have time to be looking out the window, but something about this sunrise was mesmerizing. She saw the blue water and the brown Earth, and she understood it all, the little planet spinning on its axis. She understood the heavy pulse of the ocean’s waves and the drive of evolution from the sea to the shore to the mountains to the sky and to the universe. She saw it all happening at once: plants straining toward the morning sun and the morning rush of New Yorkers descending into subway stations. She saw the cars following each other down the freeways, and she saw the birds following each other south for the winter.

She watched the sunlight spread and grow and cradle the land and dance with the sea and her skin ached for the golden heat until she finally felt it: a warmth on her shoulders, tickling the hairs on the back of her neck. She turned to the light.

The head of Mission Control said that the explosion was instantaneous. The fact that one of the astronauts on board, an American by the name of Dr. Jamie Fisher, had managed to send an emergency signal just affirmed what a strong astronaut she had been, one whose training became instinctual, ingrained in her subconscious responses. By the time Mission Control sent a signal back, however, the station had already joined the masses of orbiting space debris. He assured the public that Dr. Fisher and the other astronauts on board the International Space Station, three Russians, were already dead from the fire by the time the seals broke and the vacuum of space ripped through the station. He sent his deepest condolences to the grieving families, as they, and the whole world, moved forward from this tragic accident.