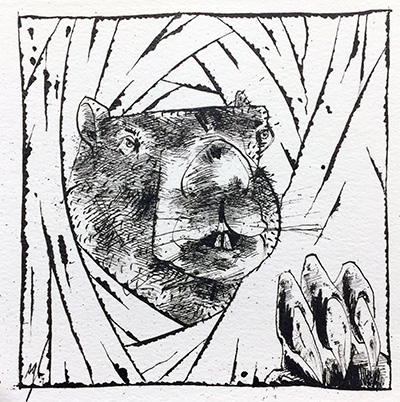 Consider, for a moment, the suburban lawn. Like a banker’s watch or a lawyer’s car, the lawn is a homeowner’s bling. Amongst the endless tracts of modest homes, crisscrossed by wide roads and dimpled with mini-malls, surrounded by miles of hot, black parking lots, each lawn must be perfect: no yellow patches, no weeds, and cropped close like a crew cut. Mom would look out our car window on the way home from running errands, her perm bobbing in the breeze, surveying the yards of others. That one was all junk-strewn dirt, that one was nothing but dead, brown grass, that one was terribly overgrown. If only people would take care of their lawns.

My parents were proud of their lawn. Theirs was lush and green. It had a geranium-lined walkway and a planter filled with ivy. In the southeast corner grew a rose garden. Its grass grew tough and resilient to the antics of children. It was a good lawn.

At eight years old, I desired my parents’ faith in my abilities above all else. And, recognizing their passion, I excelled at the lawn. On Saturday mornings, I watered it and pulled the weeds while Dad mowed and Mom worked the planters. Together we epitomized bucolic harmony. Dad in his mud-spattered jeans—Mom in her gardening gloves. I took a sort of innocent, easy pride in my work, in the responsibility my parents had vested in me.

Yes, all was golden, until the day our neighbors were invaded—by a gopher.

I remember when the mounds first appeared—soft, dark, pilly dirt piles, a perfect hole at the center of each. I snuck over to my neighbor’s yard to see if I could catch a glimpse of the gopher. How glorious when I saw a mound move, exhale, and a bit of soil fly through the air. How marvelous to see a dandelion disappear into the tunnel. Wait! Was that a nose? Protruding yellow teeth? But my parents called me home and shook their heads. I was made to understand: the enemy had arrived. It was only a matter of time until the invasion spread.

The neighbor dad was our dubious first line of defense. The weekend after the mounds appeared, Neighbor Dad took a lawn chair from his garage and set it next to the freshest pile. He settled in with a beer-filled cooler and a fishing hat to shade his eyes. He was improbably armed—with a harpoon gun. When finally the gopher peeked out, it spied the gun and immediately ducked. But Neighbor Dad took aim and shot straight through the mound, angling into the tunnel, and when he reeled the kill spike back in, there was the gopher, hanging limp. Blood trickled down the shaft. Like clay on a wheel, my regard for the gopher had been thrown and re-formed by my parents. I now felt steely satisfaction at its demise.

The end? Nah. Within a month, new holes sprang up across our neighbor’s yard, and at last the mounds appeared in ours. My parents were livid. Their own form of suburban guerrilla warfare ensued, and I was pulled, unquestioning, into the middle, a recruit on the front line of their reputation.

My parents were intelligent, academic, but not above a little violence. At 6 a.m. daily, Dad rose and engaged in battle—his latest strategy hammered out over the dinner table the night before. First a garden hose snaked down a hole to drown or flush the gopher out. By the time I walked out our front door, ready for school, water bubbled from every hole across the yard. But the digging continued.

Next he and Mom placed poisoned bait in each tunnel. This, too, had no effect whatsoever. My parents became desperate. I’ll never forget the morning Dad attached a long hose to the exhaust pipe of his 1960s VW Bug and directed it down a hole. Mom and I watched from the kitchen window in excitement, and soon oily, grey exhaust puffed from nearly every hole—by this time 20 in all—but there was no sign of the gopher.

Throughout this war, I’d been forced to sit on the sidelines, a mere observer. But one day, Grandpa came to visit. He brought his BB gun with him. He suggested shooting the gopher. After a good round of incessant bugging, my parents allowed me to spend a morning sitting at the newest hole, waiting. I held the gun steady, rested on my raised knees. For three hours, my gaze didn’t waver—not even when the sun shone in my eyes or a bee alighted on my brow. And when, sure enough, a small, brown, bristly head popped out of the hole, I fired! It was a clean shot. The BB punched straight between the gopher’s eyes, and when it slid, dead, back down its tunnel, I ran and got the spaghetti tongs to fish it out.

I’d never felt so proud. I remember that I didn’t feel the least bit sorry for the gopher. A gun can be so clean and fast. There was no pain that I could see, no squeal of fear. Without emotion to respond to, I seemed to have none myself. I was a warrior.

But three weeks later, another gopher arrived to replace the one I’d shot. With no time to recover, our lawn was beginning to die. The old holes were ringed with dry, brown grass. New holes were appearing, making our lawn nearly impassable. Neighbors were beginning to slow down and look at us. I was painfully aware of my parents’ growing embarrassment.

Which leads me to that fateful morning. It was a Monday. I remember it so clearly. Dad was up early, as usual, puttering around the garage and bothering Mom about how much money she spent on clothes. Mom stood at the kitchen window, making a sandwich for me to take to school. She wore her long, Pepto-pink, velvet robe and satin pajamas. Her hair was ruffled and her eyes still droopy with sleep. She surveyed the lawn occasionally, humming cheerfully to herself and spreading peanut butter on whole wheat bread.

We were back to flushing out the gopher. The hose wound down one hole while water burbled pleasantly from others across the yard. I stepped out the screen door and paused under our big old walnut tree. There was no gopher in sight. The air was bright and sparkly. Sunlight glinted off the grass—those parts that were still green. I liked to play a hopping game where I couldn’t step on the cracks in the walkway. As I hopped, I looked up to smile at Mom. That’s when I noticed something out of the corner of my eye. Movement! On the lawn! I turned and saw—the gopher! It was frantically scrambling and wiggling to escape a flooded hole. Its fur was sleek and dark with water, and the sun slid along its back, giving it a bluish tint. It was nearly clear and about to make a run for it.

I froze. What should I do? Run after it? Stomp on it? Neither of these seemed reasonable. Somehow, I managed to gather myself, fill my lungs and shout, “Mooomm! The gopher! It’s getting away! What do I do?”

Instantly, Mom went from sleepy lunch maker to suburban commando. Her head snapped up, eyes large, and she bellowed out the window, “Kill it!”

“With the shovel!” she roared.

She was angry. I was disappointing her. Why hadn’t I thought of the shovel? I sprang into action, running for the garage. There it was. A large shovel hung from the wall. It had a thick wooden handle and a heavy metal blade—perfect for the job.

The gopher had cleared the hole and was building speed, albeit a half-scampering, lumbering pace. I strained to heft the shovel above my head, grasping the handle with both hands. Now the gopher was traveling more slowly. I had time to pause. The gopher looked small. Vulnerable. With its back turned and its small legs desperately churning, it seemed like—a victim. And then I realized, as it groped its way across our once-perfect lawn, that it couldn’t see. Its eyes were made for a life spent underground. I hesitated.

But Mom was watching. I pulled myself together, breathed in, and with all my might swung the shovel down onto the gopher’s back. I heard a heavy thunk, but to my utter horror, it wasn’t enough. The gopher looked somewhat flattened. Clearly injured. But not dead.
It lay there for a moment. Then, appearing like a pancaked cartoon of itself, the gopher rose laboriously. I was transfixed by its tiny, broken, yet determined wet form. It deliberately placed one paw in front of the other.

My resolve disintegrated with its first miserable step. Despite the injuries I’d inflicted, the gopher would not stop. Its belly scraped the grass in its snail-paced attempt to escape the terror—the terror which was me.

The screen door banged open! Mom charged out of the house in a fury robe billowing behind her, eyes blazing, Dad following close behind. She yanked the shovel from my hands. I remember falling back, looking at her in awe. She wielded the shovel like Thor with his hammer. If lightning had blazed from the blade as it sliced the sky, I wouldn’t have been surprised. The shovel came down.

When Mom was done, there was no question that the gopher was dead. She handed the shovel to Dad, and gave me a glance that said I was the wimpiest eight year old alive. Then, wordlessly, she strolled back into the house—slippers slapping gently on the pavement.

Dad had a time of it trying to ease the gopher’s body out of the pit its death had made. Then he turned and headed for the garbage, shovel balanced in front of him with its small load.

And I was left staring at the pit that marred our last perfect patch of grass.