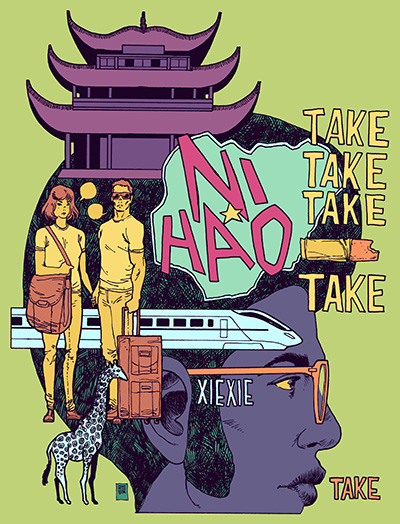 Adebowale is still unaccustomed to the Shanghai smog. He scans the streets from the back of the taxicab as it crosses the river and meanders through the growing traffic. When it leaves him in front of the train station, he remembers to say xie xie, one of the few Mandarin phrases he knows. He’s embarrassed because he’s lived in the bustling city for almost six months. But he blames it on living in a bubble of American expatriates, on working too many long hours, on not being very good with languages. The taxicab driver shouts in Mandarin. Adebowale does not understand. He hands him more money than he needs to and shakes his head apologetically.

The train station is overwhelmingly expansive. He’s already tired. He makes his way to the English-speaking counter and puts down his money. “Beijing,” he says.

The clerk looks at him. She looks at his dark hands, his dark face, his afro. “American?” she asks.

He hesitates. He nods. It’s too complicated to explain that he was born in Nigeria, that he joined his father in New York when his mother died, that he came to China to escape a growing disenchantment. The last time he visited Nigeria, he remembers how shocked he was to see Chinese characters all over the new construction sites at the international airport in Abuja. His uncle had likened it to an invasion.

The clerk hands him his round-trip ticket and his change. He thanks her and picks up his luggage, shoving the tickets into his pockets and adjusting his eyeglasses. He’s taking the fast train. It’ll take him to Beijing in ten hours. He plans on sleeping for most of it.

It’s muggy on the platform and he can see the overcast sky. It has been gray for more than a week. His white shirt sticks to his back and he fans himself a little, surveying the scene to look at the other passengers. There aren’t too many people waiting for the train. He notices a young family, some middle-aged men, a group of teenage girls. He catches the eyes of a young couple in matching T-shirts. They glance away. But he knows they are watching him as he bends to tie his shoelaces. He notices that an older couple is watching him too with the same curious eyes. He manages to smile. A little girl waves. He waves back.

The young couple moves closer to him. They are holding hands. They watch him with such intensity that he is unnerved. They talk softly to one another as the train approaches. He wonders what they’re talking about. He notices their wedding rings. He notices their incredibly dark hair, their matching yellow sneakers, the young woman’s large purse. The man is slim with a bold haircut and a sharp jaw. The woman has blue streaks in her short hair. The man is wearing clear glasses, the lenses deliberately removed. He holds their luggage. He kisses his wife on the cheek. Adebowale is suddenly aware that he towers over the both of them. It makes him feel even more out of place. He watches them as they watch him. He can smell the stiffness in the air, see the light coming from the large windows, reflecting on the clean platform. Despite the smog, it is bright in the station.

He’s stunned when he realizes he’s sharing his train compartment with the young couple. At first, the couple stands at the door with their backs to him, talking quietly to one another. Adebowale finds his face growing hot, his temper rising. He is desperate to know what they are saying, certain that they are afraid of him. He is ready to fight. Although he is now used to the commotion that his presence often brings, it never ceases to unnerve him. Most of the time it is simple curiosity, but Adebowale is guarded. He has had strangers touch his hair, caress his dark skin on the underground. Once, an old couple had crossed the street when they spotted him on a busy sidewalk. From his side of the compartment, he strains for any familiar phrases but understands nothing. He puts his glasses in his shirt pocket and takes off his shoes. He closes his bag a little too forcefully.

The young woman enters first. “Ni hao,” Adebowale says briskly. The young woman smiles shyly. Her companion drags the luggage inside. They stand awkwardly for a few minutes. Adebowale has nothing else to say. He nods in their direction.

The couple lines their things against the narrow wall and begins to make their bed. They’ve brought extra sheets and extra pillows. They’ve brought tea and cookies, shrimp crackers and juice boxes. Adebowale notices a tattoo on the young man’s left arm. The young man taps his feet to an invisible song. But Adebowale turns from the couple. He sits on his bed and fiddles with his laptop as the train begins to move. He gets up to retrieve his cell phone from his bag. There’s a tap on his shoulder and he turns around. The young woman has a bar of sweet candy in her hand.

“Xie xie,” he says, taking it from her and unwrapping it. He is taken aback. The candy bar tastes like fresh oranges. She hands him another.

“Take,” she says. He takes it. She giggles. She brings him a cup of hot tea. “Take,” she says. He smiles at her, relaxing his shoulders. She takes a seat next to her companion on a large mat they’ve placed on the floor and invites Adebowale to join them. Her companion extends his hand and Adebowale shakes it. They sit cross-legged in silence, sipping tea, passing cookies. The couple holds hands. They continue to talk softly to one another, not bothering to explain anything to Adebowale. The train speeds along. Adebowale can only see a blur of trees and feel a deep sense of relief. It is getting dark.

Before Adebowale returns to his bed, the young woman hands him an entire bag of candy. “Take,” she says. He thanks her. She touches his hand lightly and she giggles. Adebowale smiles. He reaches for his keys. In his keychain is an intricate carving of a giraffe he had bought on a trip to Nigeria a few years before. He is compelled to give her a gift as well.

“Take,” he says. She is surprised. She accepts it with both hands.

They retreat to their beds as the lights dim and the train is ghostly quiet. Adebowale sets his alarm clock. He listens to the young couple whisper to each other well into the night. This time he is not troubled that he does not understand them.