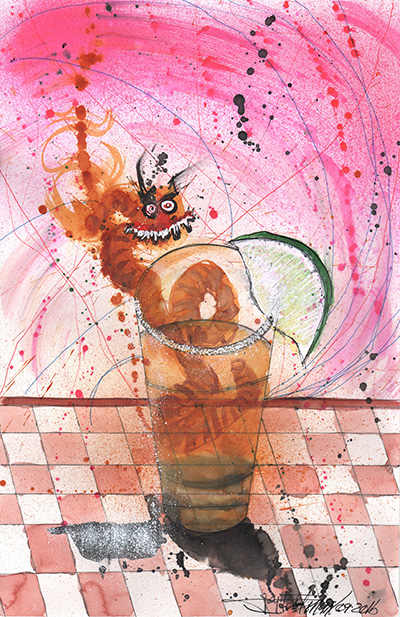 I wasn’t sure anymore if I came here to find something or lose something.

In any case my aim stayed steady; I was shooting for something in the dark onyx skies of these southern states. I entered the land of my ancestors the Indians and the Indian killers at about 2pm.

I left san Antonio with mandarins and a brown-bagged beer between my legs. I bought the beer from a gas stop, where the cashier spoke with a lilt on his tongue and a wink in his eye, he loved jesus and ‘merica, the tattoo on his for arm proudly proclaimed, the gold ring on his finger, a fixture of something true, but something he could forget for a little taste of my tan, or my cleavage in this cut up suicidal tendencies t-shirt. But the three dirty blonds at the back of the general store were in no mood for me, or my smile. I paid for my 32 oz. and was back on the road to the land of enchantment.

I was praying for something, hoping for magic, to be more then what I had been, believing I could be.

Time was running out into the third state of this tri-state journey and I was still in a fog, that throbbing fog of having lost him and at any moment possibly losing her, alone in a California hospital bed, drifting in and out of consciousness, tubes down her throat forcing the bile out, keeping her alive by taking everything away.

But here I am Nuevo Mexico on highway 25, headed toward Rivera on a road, to meet a woman I knew from L.A., who would bring me to the woman in Llano del coyote, the one with the pistol hanging on a nail in her bedroom and a fire burning heavy in her den. She spoke steady, she must have known the properties of healing that happened between her tongue and her teeth, she talked of “homegirls” and mothers, in a raspy tone, I could see the rebellion in her jaw line.

These women, this pack of witches and I, sat, half a dozen deep under a New Mexico moon, drinking some kind of tequila and cackling at the mother Fuckers and the “puro pinche heartbreak.” I need this, to be shaken by laughter or tequila or both, need to hear how laughter sounds after a handful of small embellished deaths and looming motherlessness, need to be somewhere where howling could be heard, I wanted to howl; to wail, like I had been, on the floor in my bedroom these past nights, wanted to cut the seams of my skin, absorb the earth, dig bare hand into the dirt, scraping away the rocks, until I found something; I have always read how digging leads to treasures, unexpectedly, and all these women, had dirt under their nails.

“how did I get here?”  my head thrust back and the lime and the tequila flowed down, “was this another dream?” “would I wake up with him beside me and my mother safe in Pomona making a PB&J for my dad?”

Nah I was alone, here with these women, alone, like my mother was, in California taking shallow breaths, the pain so great you stop crying, give in to the hum and the monotony of the whole thing, flick the hospital TV on, any channel, it doesn’t matter ‘cause we are not paying attention anyway.

I left for a reason,

poetry or my usual foul mouthed drunkenness, under new scenery, I came to lose, or gain, I still don’t know.

I came I suppose to find a guide through these mountains and dirt roads, where the street names disappear and all that’s left are