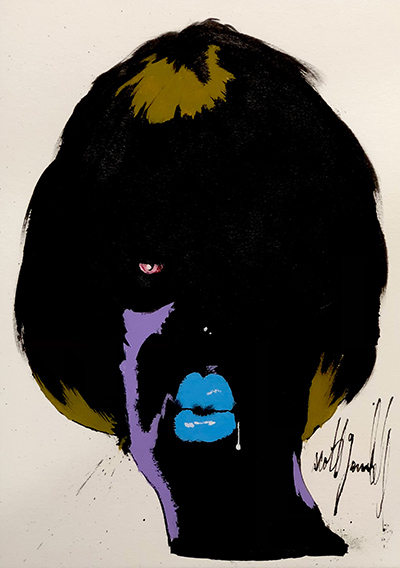 Fourth of July my senior year of high school, Uncle T-Ray got a girlfriend. Mind you, Uncle T-Ray is about sixty and I don’t even know how many years old by now, the eldest of six brothers and one sister. This was around the time that Mama and Daddy started going to that old bowling alley in Carson that did karaoke and sold fried chicken wings. On Thursday nights they’d roll out with Andre and T-Ray, because my dad’s only real friends, and my mom’s by extension, are his brothers. They’d come home drunk and laughing at recordings of Mama singing, “you’d better call Tyrooonnneee.” By the morning she’d be too embarrassed to watch them. The place itself was run down and served an odd, sometimes seedy crowd, but the drinks were cheap. That’s what they said. That’s why they liked it.

And that’s where Uncle T-Ray met Lorraine. I guess they were getting close because after a month or two of dating he invited her to a family function. I don’t think any of us will ever forget the moment this woman walked—no, stumbled—through the front door of my aunt’s house in Inglewood with her blue, glittery lipstick and a bottle of Fireball loosely gripped in her fingers because, mind you, we are not that kind of family. In my family, the most alcohol you should be drinking at a family function is a couple glasses of wine or maybe a few beers, mostly because my Uncle Collins, T-Ray’s younger brother, is the pastor at the church we go to on Sundays. We’re the kind of family that chased off my cousin Elijah’s girlfriend for being a bit too affectionate in my aunt’s pool, that masquerades partners as “friends” because my kind, and my Uncle Darren’s kind, are condemned to hell.

No, in our family God’s will comes first, and our wants and needs—each other’s true selves—that comes second. But Miss Lorraine didn’t seem to care what kind of family we were, she had no problem arriving to the function drunk off her ass with my sixty-year-old Uncle in tow. Good to see just the look on my aunt’s face again.

Of course, the aunts talked about them all night. They were the stars of the event. I think, secretly, they were all glad to have something to gossip and laugh about, something to spice up the usual, somewhat tiresome discussions of work and the church and my grandma’s cat. Like how we were all so hungry to know what happened at the cousin’s trip to Vegas a few months later, the trip I was too young to go on. Maybe that was for the best.

Well, what happened changes depending on who you talk to. If you ask Tiana, who always seems to be the main instigator in that group, she did nothing wrong, but Elijah smokes the devil’s lettuce now and so you can’t really trust his word. If you ask Elijah, who’s Collins the pastor’s son, he’ll probably say she was acting like a whore to get free drinks and embarrassing them. If you ask Aliyah, you’ll get perfect impartiality, but she still didn’t invite Tia to the wedding. But, of course, Aliyah has an image to uphold. She’s the one who did everything right: went to a prestigious Christian university where she met her basketball-playing husband, married rich and is currently living happily ever after.

That’s what my family wants for all of us younger gens, I think. Here lies my grandparents’ unfulfilled dreams of prestige and respectability, half-baked and left to fester in the fields of Mississippi or Texas, or in dirty Santa Monica bathrooms in desperate need of cleaning. In their prayers, they ask God to give to us all that they never had. I haven’t had the time to know if I want the same.

I love my family, I do, but at times their expectations become heavy, enough to drag me down and smother me, and I think of Miss Lorraine; her easy ability to glide above my aunt’s stares and my grandpa’s disapproving grunts. When I was in the sixth grade, I was especially excited one day to go to class in this new bright purple lipstick that I bought at CVS. I don’t know exactly what it meant to me at the time—maybe I just thought it was pretty—but I know that to my mom I looked like a clown and so she made me wipe it off, like Daddy did to her when I picked out a color for her during a routine grocery trip.

Last week I flirted with two guys who I didn’t even remotely like at a frat party my friends took me to. The first time was to get in. The second, to get alcohol. The third to get in the girl I actually wanted to see and kiss her on their lawn. The fourth time was just for fun.

When I think of this, some part of me can’t help but wonder what my family would think of me now. If they knew the truth. If they didn’t think I would leave this place just like Aliyah, with a useful degree and a good, God-serving man. I guess, what I mean is, even though I laughed at her and played along, I sometimes envy Miss Lorraine more than any of them.