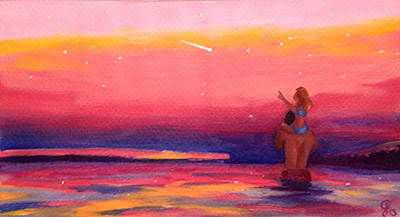 The decision was his because he was the one paying for the trip. My father has a romance with Latin America, an idealized view of any country or region with Spanish influence. He used to be a diplomat in Quito but that was a long time ago. That’s when the love affair began.I’ve seen pictures of him from his time in the Foreign Service. He has hair down to his shoulders and his eyes look more blue than grey. He was stationed in Ecuador and became fluent in Spanish, boasting that many locals were so impressed with his accent and proficiency that they asked if he was born there.

“Born in North Carolina, attended the University of Virginia.”

My mother also studied at the University of Virginia, but their paths didn’t cross there. They met years later in Manhattan when my mother’s favorite color was black and my dad had already been married once.

It had been years since my father was able to use his Spanish so he decided on Belize for spring break. My mother was an insomniac then and filled her sleepless nights with Yahoo Answers, strong coffee, and images of vacation destinations. She agreed because she was already well-versed on the Belizian lifestyle, thanks to askjeeves.com. My sister was too young to have a say and I didn’t want to go to Belize because I thought I was in love and if I was apart from him for more than a day, I would probably waste away.

The hotel where we stayed was accessible only by boat. We flew into Belmopan and ate tapas at a restaurant without doors. We waited there for a ferry that would take us to the island hotel and my father conversed with the bartender, moving his hands and rolling his r’s with more vehemence than I had ever heard. I stared at him, his elbows across the bar made of bamboo and palm, and didn’t know my father. He laughed and I realized that I had forgotten the sound of it.

It was in Belize that I got the most severe sunburn I can remember. My mother shoved a bottle of SPF 75 at me and I refused to put it on, saying that I was so white, I was almost translucent and if I didn’t come back home with a decent tan, this trip would be a complete waste. So I laid out unprotected, wearing a white bikini that my mother said was too tiny, defiantly sipping a virgin pina colada, becoming the color of uncooked salmon. My forehead got the worst of it. It blistered and was so painful that I was forced to remain expressionless for the next few days. I hid under an oversized striped yellow umbrella for the remainder of the trip and watched my father become of the sea. He walked into the water before the sun reached its peak and didn’t emerge until it was almost too dark. He put my sister on his shoulders, just like he used to do with me before I grew up and before he turned inside himself.

My father took pity on me that night because of my raw forehead and allowed me to use his cell phone to call home.

I walked away from my family, to the wharf that was further down the beach and called my boyfriend.

It was then that I found out he had gotten into college while I was away,

My five minutes was up but I wasn’t done talking. My father started to walk towards me, yelling to hang up the phone. I wasn’t ready to give up, not yet, and I started to run. I ran down the wharf, the phone clutched to my ear, wanting to hear that that it didn’t matter that he was going to college in Atlanta, that it didn’t matter that I was still in high school, that we weren’t like those other couples that broke up when college rolled around. We were different, right?

My father started to run when I started to sprint, screaming that this phone call was going to cost him a fortune and that I better hang up right now, young lady, or else.

I reached the end of the wharf. There was only ocean in front of me. My father wrenched the phone away, disconnecting the call, ignoring my wails, tears, curses.

“We are in Belize for god sakes. Look out at the ocean, listen to the language, be here.”

My father was trying to connect, to share with me the love that he had for Central America. He was hoping that his first love would also be mine.

My father let me drive a golf cart the last day in Belize. My mother was terrified and braced herself against the thin body of the cart, holding her breath every time I made a turn. My father didn’t say a word. He didn’t raise his voice when I almost rear-ended the cart of a street vendor who was selling watermelon juice out of glass jars, he didn’t yell and grab the wheel away when I took a wrong turn and became stuck at a dead-end, sandwiched between two houses with mud walls. He looked at me and nodded his head forward.

“You can figure it out. You’ll be just fine.”

That night, went back to the restaurant without doors and I stood next to my father at the bar. I couldn’t follow the Spanish he was speaking with the bartender. I was taking French at the time, but I wanted to stand next to him.

I haven’t seen him in a while. That was the last vacation my family went on. My father ran out of money and didn’t know how to get it back. My mother is an insomniac again. My sister doesn’t remember Belize. I tell her stories to remind her. I tell her of the man who spoke with his hands, who taught me how to navigate out of a dead end, who became the ocean, and put her on his shoulders so she could be closer to the stars.