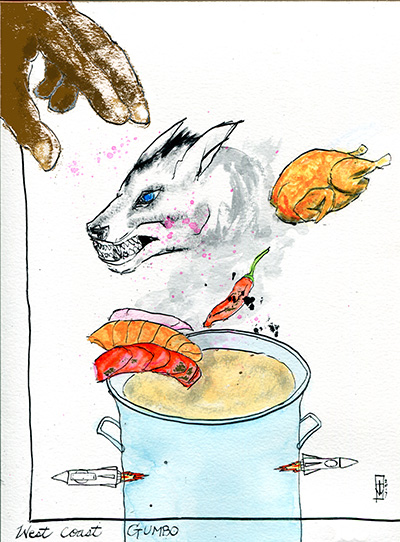 L.A. is the new New Orleans: a spicy melange of cultures that improves life for all.

When my family, along with many other New Orleans expatriates, moved to Los Angeles in the boom years following World War II, we were exotics, bringing something new to this city and its great racial divides. Our Creole genes made us what racists and eugenicists feared more than anything for the future of the United States—a miscegenated people. They disapproved of us because we were living proof that folks hadn’t paid attention to all those traditional cautionary tales (like Jane Eyre) in which race mixing led to madness and worse.

In New Orleans, people had been tripping over those formidable divides of race and class for centuries, and the tumbles they took produced a multi-hued folk who—even if they came close to whiteness—were not white. We were the “mongrels” who proved that the racial pool was polluted, but our lighter skin brought a certain status, even if undeserved.

When my family arrived in Los Angeles in 1963, as the Creole exodus was tapering off, we moved to the Crenshaw area and became black.
Sure, there was some bumpiness in that transition, but our neighbors were friendly, and we grudgingly lost our colored/Creole status and found the clarity of blackness. It was all for the best because there is strength in numbers, and the struggle for civil rights provided the commonality many of us needed. Race wasn’t contingent on appearance—it was a product of default. We might not have looked black, but we certainly weren’t white.

Now I live in a Greater Los Angeles that is more like New Orleans than I could have ever imagined, and I love this place for it. I’m at home in a city with a majority Latino presence and huge Asian population. It’s hard not to notice the crazy quilt of a culture we’ve become.

In an earlier day, police officers would stop my mother as she drove through our neighborhood because they thought she had to be lost, a wayward white woman in a black neighborhood—a recipe for disaster. Today, she’d be taken for a fair-skinned Latina. Then, fair-skinned Latinas lived far away, in the distant land of East Los Angeles. Segregationists had, with a genius for detail, used racially restrictive property covenants to divide the city into ethnic homelands. Who knew about those folks over there on the mysterious Eastside? Or the blacks in the central city? I didn’t know any white kids except for once when I met the kid who played the character of Grasshopper in the Kung Fu television series.

It’s true that we have neighborhoods that are homogeneous in terms of race or class, and that driving while black or brown in, let’s say, Beverly Hills, can still be dicey. Yet, if you want to live in Los Angeles and you don’t seek a perverse fantasy of racial exclusion, a world awaits you. Seek out those junction points of culture and you will be rewarded as if you’ve become a cultural anthropologist of some future America.

Back in the day, the Holiday Bowl bowling alley on Crenshaw hinted at what Los Angeles was to become. It had to be the only place in town where you could get sushi, sashimi, and grits under one roof. Blacks and Japanese Americans could seemingly ignore each other in close proximity there, and yet our eyes were open and we did end up influencing one another.

In New Orleans, the clash and combination of peoples and cultures produced music, cuisine, and architecture distinct to the region but emblematic of what the country would become more than a century later.

Now we see a similar phenomenon happening here, but on a far larger scale, involving diverse cultures from around the world. Los Angeles is a city awash in complexities of cultures, and my life is enriched by that wild abundance: from Zankou Chicken to the cool of “rice rockets,” those souped-up Nissans and Toyotas used in street races and now showing up all around town.

As long as we don’t wall ourselves off from one another, who knows what kind of world we’ll fashion in this changing land? One thing I’m sure of, it won’t simply be cosmetic, as is sometimes suggested. I don’t see the future as simply the promise of a permanent tan for all.

We’ll mix up the genes, sure, but it will go beyond just sharing our best physical traits. We’ll share our best cultural traits as well. Perhaps the isolation of the nuclear family, the alienation and loneliness of modern society, will be lessened by family-centric Latino and Asian cultures. Perhaps we’ll all be infused with the reverence that Asian culture, in particular, holds for education.

I don’t have a problem with a future where the highest values are family and education. I could live with that.