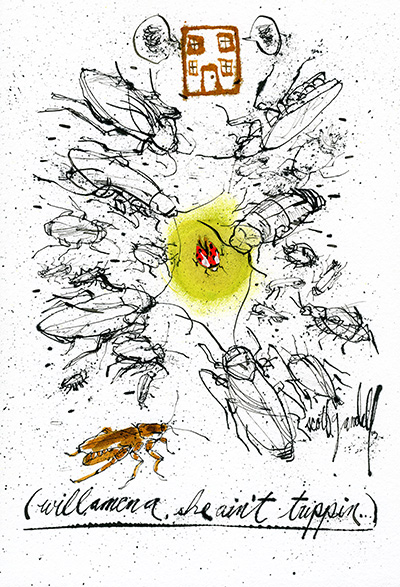 I never liked them mexicans no way. always up at all hours, playing that off-beat shitty mexican taqueria tuba music. johnny law asked me did I hear something. yeah, I heard something. I hear everything. I live right above them loud-ass, fifteen-people-in-a-three-bedroom-condo-who-the-hell-knows-who-really-lives-there-loud-ass-coming-and-going-at-all-hours-muthafuckas. one of their damn-ass, come-and-go freaky tweaking friends got up in their door and shot the one teenage chola chick that is always on the phone, crying about, qué es eso? michael, dónde estás? why you doing this to me? why you cussing me? you can’t even come see your baby. qué es eso? you no kinda man, michael: this was all freaking night every freaking night. and then her two cholo vato brothers choked the fuck out of his tweaking ass. that’s what happened. you don’t need to dress the shit up with any kind of investigation. if you have muthafuckas coming and going at all hours like your house is a bus station, shit like that is gonna happen. this ain’t tragedy. tragedy happens when you don’t expect the shit. all us neighbors knew something like this was gonna happen around here one day. johnny five-o didn’t like that answer, so he had me talk to detective johnny five-o law. he said, i’m detective harris…and before he could finish I said, AND??…pttch, that’s what I laced him with. AND??… like what does him being detective harris got to do with him being in my way? what’s he gonna do? matter of fact, I said, move your black and white piece of shit out my drive way, I got somewhere to go…

(…and willamena just got that new car, too)

so now I gotta wonder if there’s a payback. I didn’t never know who was who anyway, and now I’ma have to be extra-vigilant and shit. touch my new altima. please. please:

let a muthafucka touch my shit.

I don’t care if they even just breathe on it wrong, I’ma start right in if they do. you can’t let them get a dang inch. you know, them vato chumps was down there working on their hooptie rides whenever my carport was empty, like when I was at work, and the fumes, the fumes: I had to tell the oldest vasquez-or-whatever-his-name-was-boy that they couldn’t work on no cars in my carport, their carport or any other carport that sent them damn toxic fumes up into my apartment to stay. he was alright about me telling him that, though. he was always the one with the most sense, probably because he was always looking out, watching the sight lines for the next meth-head coming up on a bicycle to get his medicine. somebody has to run the operation. that’s why I didn’t trip when I heard he rose up and choked that michael muthafucka to death. he wasn’t gonna just sit there and be shot, too. he got a free kill. a get out of the gas chamber for free card. if a muthafucka comes up in your house and blows your sister’s face off, you can kill him frank nitti, and ain’t nothing gonna happen to you. the grim is with the ten year-old that helped him do it. how are you gonna be in the fifth grade and go back to school after you helped choke and beat to death the man who shot your sister’s face off. here’s what a little vato did on his christmas vacation. here’s what a little vato lost on his christmas vacation. this is what a little vato lost, and here’s why a little vato ain’t never gonna be the same.

well yeah, I feel bad for that baby. mostly because there ain’t no women left in that house. that mexican girl and her vato brothers didn’t have no mother living with them any time I was ever living over top of them. now that the girl is dead, the only female in the house is the baby. she’s gonna grow up rough and wrong. I remember we had this same issue happen when I was little where my mama’s half-brother was beating his wife, and that woman up and left his ass with they seven year-old daugher to raise all by himself. and he couldn’t handle shit about raising no girl, so we had my cousin come stay with us, and she had absolutely no home training. she ate dirty, talked dirty, pissed messy and stayed dirty. and ain’t no whippins mama gave her ever took hold. mama finally had to take her to an orphanage, ring the bell, and leave her on the front step with a note that said, my family dead, pinned to her shirt. that’s what that baby got in front of her. no women in the house to make her act right. who gonna do it? them little killer drug dealer uncles? her broke down grandfather? he got a house full of people running his house like they own it, and he don’t know two-thirds of them. I seen that plump red cross worker lady standing around looking like she wanna keep that baby for herself. all old-and-never-had-no-man-looking. probably thinking about how she is gonna get away with keeping that child. she probably thinks like I think like everybody thinks: them damn vatos don’t want no baby around that ain’t nobody taking care of. it’s a messed up situation. hey, don’t look at me. I’m just saying what it is, just saying what it will be.