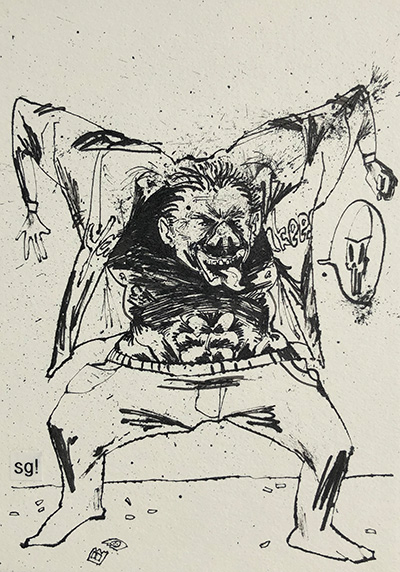 Senior year business-typing class, first week of school: there is a side conversation Marcella is having with some girl right behind my left ear, & I’m not paying attention, but I do hear this: you know, he ain’t really like that, he’s been holding doors & bringing me roses, & he’s been really sweet—it was something like that. & she is talking about Boyd. This is why this is strange: she had never told me about him. I was busy during the summer doing football two-a-days, & she had gotten a job at McDonald’s (where she met him). But. We talked on the phone three times a week, & she had never said word one about Boyd. This is how she decided

to tell me: sitting behind me in business-typing class, telling some random girl just loud enough so I could barely overhear her conversation, so she could pretend she hadn’t hid it from me, so I couldn’t take her to the side & flash on her about how he was bad bad bad, so I couldn’t tell her I already knew he was gonna kill her one day.

He is the rumor that turned out to be true, the urban myth that left more than a fake footprint: when he was 14, he struck out to end a Babe Ruth League baseball game & got so mad that he chased the pitcher into center field & beat him with the aluminum bat he had struck out with. There came a fractured hand, a fractured arm, a shattered jaw. For that, Boyd spent 3 years in juvenile correctional facilities. Here’s another one: the week he got out of jail, he got sent right back in for shooting a bee bee into his neighbor’s cat’s anus from two feet away. So: those are the facts. & this was the head Marcella chose to be in love with. This was that muthafucka.

Boyd is hard to see, set deep in his car, because his seats were treated low & his windows had dark tint. But me on one knee can see him good. He always wears a Yankees’ Starter with no shirt on, so I can see his body, hard as a pipe, at the open snaps of his jacket. He is musty from wearing his satin jacket with no shirt like that, & it is mixed with some nasty Stetson cologne or something. This smell camps in his car & floats out the window into my nose. Why you messin’ with her? Who? You know. Marcella? Stop playin’, little bitch. Don’t play ignorant, little bitch. Naw, I ain’t, nothing. Why I always see you around her? I have five classes with her. I don’t care; I know what you say to her, little bitch-ass. & at least I know what the problem is . . . he found the school picture of me I gave her. On the back of this picture was something I wrote from a Prince song she & I both liked: Let’s Pretend We’re Married is about to make me get cancelled.

So I’ll stay away from her. I know you will, & the barrel taps my forehead like a hammer. I don’t move, & again, I know you will, little bitch. & he doesn’t say it, but I hear it, and here’s my gun on your forehead in case you forget the rules.

Marcella had twins, a boy & a girl. I never saw them. I left for college in the fall, & I heard Marcella moved in with Boyd about a block from his mom’s house. I heard Marcella’s older brothers messed with Boyd for a minute about getting her pregnant, but they let up, because, you know, he was always cool to them. I heard Marcella had bruises on her arms & face while she was seven months pregnant. I heard Boyd was with some other girl the night Marcella gave birth. I heard Boyd would scream and beat on Marcella if the babies would cry too much. I heard all these details, all these things people were seeing & not doing anything about. Know why they didn’t do anything? Here’s why: a girl is supposed to know the rules. If she gets beat down, cheated on, fleeced, gamed & doesn’t leave that situation, that’s her business. Not my business, they say. Since being a player is respected, it’s all good to run through a chick, break her down, & make her serve & stay. Nobody says a word. Marcella can think. Nobody made her stay. If she wanna go, she needs to go. This is times ten when a baby comes into it. When a baby comes into it, it’s like a glass box closes up around the mother, the father, & the baby. Everybody can see what’s going on inside the glass box for the show, but nobody cares to do anything about it. Then, when the tragedy comes, the glass breaks, and everybody goes rushing over like they never saw inside to know the trauma was coming. Well I saw it coming, & y’all got to wear this shit for always.