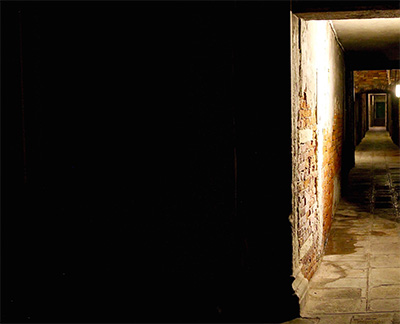 The Voice
by Kia Penso
Illustrated by Rosalind Helfand

Yesterday after work I walked out of the building and crossed the street and entered a strange scene. Ahead of me was a woman walking with a white cane. Instead of sweeping the ground with the cane she was tapping it hard, irregularly, as though she expected it to hit some hazard that she dreaded. Her progress was very slow, and the sense I got of her movements was that they were in that state you get into when nothing is making sense any more in what you are doing and you are just sort of whacking vaguely and randomly and helplessly. As I passed her I noticed that her face was red with rage and frustration. She was maybe in her early forties. Two women walking some distance behind were watching, but like me, they didn’t know what to do. I crossed the cobblestone driveway of a courthouse, and there the blind woman stopped; she could feel the change in texture of the pavement but was too consumed with panic and frustration to know what it meant. If she could have calmed down she could have figured it out, but she was way deep into confusion and rage. She stood there, slapping at the ground with the cane and stamping her feet, not uttering a sound, just livid, miserable.

Two black guys on bicycles came down the street and stopped at the corner, waiting to cross. Not spandex-and-water-bottle cyclists but I-can’t-afford-a-car cyclists. One of them had dreadlocks. They looked like the sort of guys who in their younger days were always either being made to stop or being made to move on. The Invisible People of D.C.

I turned away from them towards the station, and then I heard, “Come on, baby.” It was a “velvety baritone.” Velvety and sweet and rich and solid. It could have been Lou Rawls, it could have been a Stylistic, or an O’Jay or a Temptation or an Ink Spot. It belonged to the cyclist with the dreadlocks. It was warm, intimate, reassuring. “Come on, baby.” I looked back. The whole scene had stopped. The blind woman was still stuck at the edge of the cobblestones, the two black guys were looking back, the two women bringing up the rear had stopped too. And now me. The foot stamping stopped; she was listening. “You all right now. Just come on straight.” Something relaxed; the woman reluctantly stepped forward onto the cobblestones and made her way, hesitant and then with more confidence, towards that marvelous voice. “Come on, baby. Come all the way to the corner.”