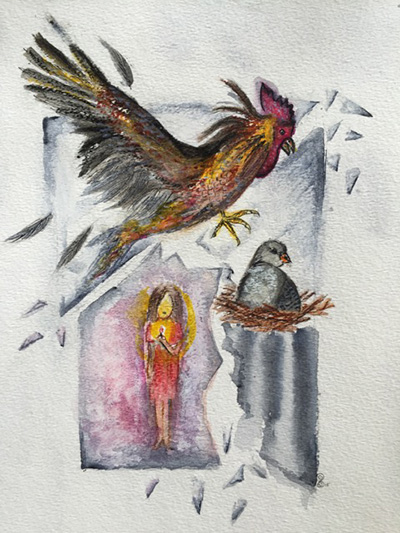 a.
The rooster comes upon his reflection.
Repeated explosions of wings, he unfolds,
puffs up, bear size, claws click and scratch,
huge chest batters the glass clatters
loose in the frame, a miracle that it does not break.

aa.
When she looked in the mirror she saw a little girl
inside her body lighting matches, burning her skin,
until she did what the little girl told her to do.

aaa.
One dove waits for its mate to return. All calls go unanswered.
She builds a nest in an abandoned shed up against a broken mirror.

Some Kind of an After Taste

Innocent as a candle’s flame, wax melts until tears roll,
reflected in a mirror, it is hot twice on the tongue.

My perverse uncle has died. At fifteen I sold whites for him, “it’s not wrong,
if you don’t think it’s wrong” hands slide under brown corduroy. Pills bitter ice on my tongue.

Who can speak this liquid cough of a language? Slimy words wiped off with sleeves,
apologies choked off, voice box squeezed, heart muscle a vice on the tongue.

Breathed through the throat, top teeth dragged lightly over bottom lip, sound stopped
against the palate. Say my name, Yvonne; it doesn’t roll nice off the tongue.

It floats out of my mouth
when I mention him,
hovers in front of my face
like a little hologram,
or translucent paper doll
with different outfits—
grey suit, wide tie, blue shirt,
tiny work attire;
dull yellow shirt, burnt orange pants,
the golf clothes!
upsetting, vertical striped
pajamas, or a ridiculously
wrinkled, faded hospital gown.

I always wonder who else
can see him, but nobody
says anything if they do.

It’s hard to tell if it’s smiling
it only stares at me,
or out windows,
it doesn’t speak, or give
the “I’m home” whistle.

I hate his ghost
because when it doesn’t show up
it’s a disappointing reminder;
it’s like when he was alive.

A long name on a freeway overpass.
PHAROAEROSOL; tagger royalty.
Block letters tilt and lean a painted dance.
Purple fades to magenta perfectly.
His northbound subjects raise their coffee cups. “
Hail to the leader of this desert land!”
How long he rules is up to budget cuts,
no posse exists that can fight the sand
blast that will rub him out. Today eyes gaze
up at a king descended from the sun,
sitting above the 710 and Gage.
From Compton to Commerce, it’s our last run,
our last chance to pay the pharaoh homage,
tonight LA wipes him right off his bridge.

Oh, he’s too high to shout, or hide, or run.
He’s pinned under the ghetto-bird’s spotlight,
then unfreezes, drops the bag and it’s on;
he bolts past squad-cars, escapes into night.
Torn pocket and blue under fingernails
help him tell the story all the next day.
Homies in dead cars go over details,
migrate inside to play World of Warcraft.
Any motivation goes up in smoke.
Their boredom rolls downhill, getting bigger.
They feel it close in, they know it’s no joke;
they’re not at work, they’re not in jail either.
They’re just taggers, each one has what he has—
his own name on a freeway overpass.