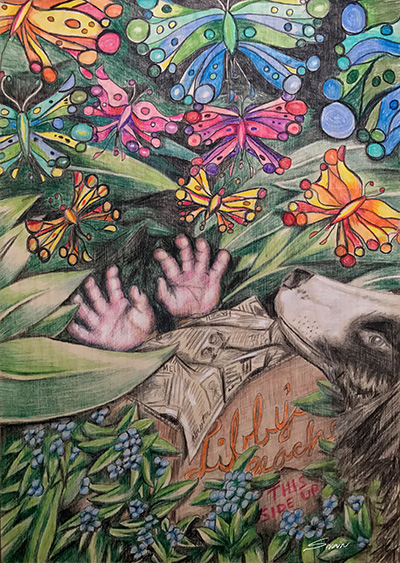 The Baby on Baxter

On Baxter Street, a hill so steep that drivers stop
at the summit, abandon their cars, and study
the road, a hiker pauses to catch his breath.
His dog running on ahead, noses a crumpled box
nestled in wild sage and blue plumbago.
The man tugs at the leash, almost misses
the small fingers waving, mistakes them for butterfly
or scrap of cloth. On this morning lit by mustard
gone to seed, the cardboard box reads:
Libby’s Peaches, Right-Side Up.
He kneels beside it, brushes aside a blanket
made of newspaper. The eyes of a baby
on his eyes. The breath of a baby, the breath.
Now, the weight of a baby in his arms.
He thinks, This is what I’ve been waiting for.
Then a driver brakes at the top. Makes the call
to 911. Later, the man watches himself on TV,
feels the baby leave his hold again and again.
Rewrites the ending. This time, takes the baby home,
becomes a father to many happy children.
On another street, a woman with aching heart
bathes in the light of the nightly news.
She remembers the smell of sage, the heft
of a life she laid down, cupped in blue blossoms,
wonders, Was that what I was waiting for?

Breathe in the mud-stung silence of earth,
life unfurls in one eternal night
inside a tunnel feathered with casing and leaf.
Each day, for seventeen translucent years,
sleep to the pulse of quaking aspen and oak,
pale blood kindling in a woven coat.
Sip the juice of eucalyptus root,
tendrils of silver birch. Neighbor with mole
and earthworm until some inner clock cracks
your shell. Crawl up the root-warm passageway.
Feel the shock of air, of breathing sky,
of wings: two pairs unfolding, paper-thin.
Five riotous weeks above ground: no wonder
you sing, sing, sing without end.