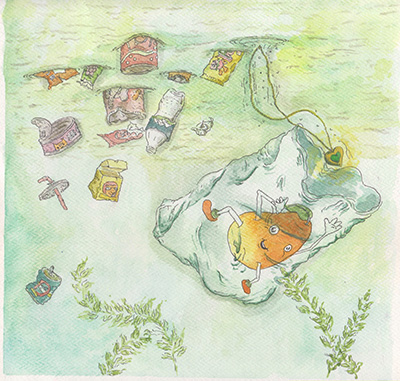 Linda hung her fingertips over the side of the paddleboat and touched the top of the water. The lake was cold today. She leaned against her seat and let Edgar paddle.

It was the kind of day when her thoughts collided together and she couldn’t think straight even though she tried to. She felt like the fireflies from the lake had flown into her ears during the night and they were playing tag inside of her head, leaving everything jumbled and hazy.

She squinted her eyes and looked up at Edgar. He sat next to her. His shoes were soaked through with water. The hairs on his legs had begun to sprout. They stood on end like black daggers.

The hairs on her legs were just as black but thicker. Last week, she had stolen the razor Abuela used on her moustache to shave them. She liked the way her skin felt afterwards. There had been a few cuts near her ankles, in the hard-to-reach bits. But then, a few days later, the hairs were back and had doubled in numbers, like an army of ants marching toward her knee.

Edgar steered the boat near the fountain that erupted in the middle of the lake. Wrappers and cans were sucked into the whirlpool surrounding it. They moved faster and faster until they were pulled under. Linda spotted a stray bag from Abuela’s fruit cart. It brushed the side of the paddleboat. The dancing mango on the plastic looked like it was drowning. Its arms extended over its head in a final cry for help, the smile on its face appeared demonic instead of clown-like.

Linda looked up. “Where you going?”

“To the tree with arms.” Edgar pointed toward the small island in the middle of the lake.

“Cute isn’t going to get you out of here.”

“What gets you out of here?” He started to paddle faster.

“Yeah you are. You’re like the smartest person I know.”

The boat plunged into the side of the makeshift island. Edgar and Linda got out and stepped into the muck.

The willow tree looked like it belonged somewhere else, someplace nice where there was clean sand instead of mud sprinkled with empty bottles. The tips of the branches touched the water; the slime from the surface covered the leaves. Up close, the branches did look like arms. Edgar pushed them aside, and they stepped into the canopy.

The green light made the pimple on his chin look whiter than before. Linda wanted to pop it. The fireflies under the canopy started to fly faster from side to side. She tried not to listen to the humming in her ears. A mosquito landed on her neck. She swatted it away, but it landed again.

“Just stand still.” He cupped his hands and slowly moved them toward her neck.

“Shhh.” He caught it between his hands and smacked his palms together. He opened them and showed her his catch.

Linda looked down at the squished body and up at Edgar. His eyes had flecks of brown in the green. They looked at her like they wanted to count all her eyelashes. She could see the beginnings of a unibrow above them.

“I have something for you,” Edgar said. “I think it might have gotten a little wet.” He pulled a wad of tissue paper from his pocket and handed it to her.

Linda opened it. It was a necklace, a gold chain with a heart at the end of it. An emerald stone was embedded in the middle.

“Thank you,” she said to Edgar’s shoes. The right one had a hole in the pinky toe.

She flipped the necklace over. The inscription on the back said, “My Love, My Life, My Forever.” She could see the reflection of her nostrils on top of the cursive. She remembered seeing it around the neck of Ms. Fieldman, the city councilwoman who only came to the lake for ribbon cuttings. Linda wrapped the chain around her hand and pulled it tight. Her fingers bulged like mini-sausages.

Linda grabbed Edgar’s hand and squeezed. She let go and threw the necklace into the lake. It almost hit a couple in a paddleboat.

“Did you know what I had to go through to get that?” Edgar said.

“That’s why it belongs at the bottom of the lake,” she said. “I don’t want some sticky-fingered necklace.”

“I should have listened to Steven. All you Martinez women are crazy.” Edgar walked toward the paddleboat and pushed it into the water.

“You’re just going to leave me here? How am I going to get back to the other side?”

He walked up to her and got that look again, like he was counting all of her eyelashes. But this time, Linda stared back at him with the same look in her eyes. And then the fireflies under the willow tree really started to fly back and forth and into each other. And Linda would later tell Clarissa, who would later tell Sofia, who would tell Abuela, about how the branches of the willow tree braided themselves together and formed a wall. And how the willow tree filled with fireflies, thousands of them, and how even though it was LA in the dead of summer, with the cars roaring and the smog from downtown filling up the sky, you could see, from across the lake, the glow of all those hovering fireflies.