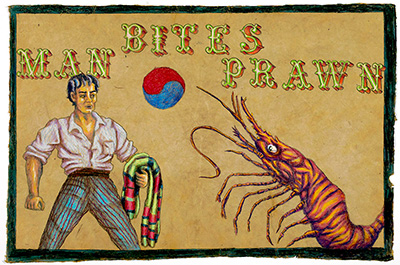 The first cold night of fall I went to the Living Fish Center, a small, superbly named Koreatown restaurant in whose window a brilliant neon trout burned in permanent mid-leap. Inside, a school of scarlet fish stared dumbly out from their dim tank, and a bubbling glass raceway teeming with prawns ran just below the ceiling. I am always happy to see swimming prawns.

From its name I had always inferred Living Fish Center was a vivarium, a Korean analogue to Maine lobster pounds or posh Chinatown seafood palaces. But inside, the restaurant seemed more like a roadhouse really, a basic Korean cafe sparsely populated with students, elderly Korean couples, and knots of workers still in their technicians’ overalls. A chef stood mute guard over a refrigerated counter that looked to be borrowed from an ice cream parlor, and cards on each table advertised fantastically expensive dinners in blocky Hangool script.

At the table, a waitress handed me a plastic glass half-filled with tepid tea that tasted mostly of detergent and slid a small dish of oily toasted-rice gruel onto the menu-imprinted placemat. “Eat this first,” she said, shrugging, “perhaps you will like it.”

It wasn’t particularly good. The following courses of rubbery squid sauteed in spicy-sweet bean sauce, clumsy fish chowder churning in its black iron pot, and sugared, fried seaweed were hardly better. On the Korean sashimi platter, the slabs of tuna were still frozen, the whitefish dull, and the salmon had the funny, off-orange color of marshmallow peanuts. You wrap Korean sashimi in lettuce leaves with fermented bean paste, sliced serrano chiles, and cloves of raw garlic, so the actual taste of the fish may be fairly irrelevant; I suspect shark chum would taste good with raw garlic and big bottles of cold Hite beer. The slices of raw sea cucumber on the platter were fine—gooey and briny and fresh, but you can eat only so much of that stuff before your system goes into overload. More dishes arrived (part of the typical Korean generosity), including a whole fried fish, a foil tray packed with sauteed onions and diced shellfish, and half of a fresh sea urchin packed with its mild, briny roe, spines still describing circles in the air.

It is never easy to intuit an Asian cafe’s specialty on a first visit, and Seoul-food menus that steer non-Koreans toward bland stews and grilled meat dishes are often the most unfathomable of all. In fact, a New York Times reporter famous for her knowledge of Asian cooking recently wrote about a Manhattan soon tofu restaurant, apparently without realizing that the restaurant served no soon tofu at all.

It wasn’t until we looked at the prawns leaping about the tank, the chef behind the bar, and the contents of half the customers’ plates that we figured out what the restaurant’s specialty might be. I said a couple of words to the waitress and the chef emerged from behind his counter, climbing up to the raceway containing the prawns.

He dipped a hand into the tank, rippling the still, clear water until some of the prawns sprang up to nip at his fingers. He plucked the liveliest specimens from the water and brought them back to his station where he quickly removed most of their shells. A few seconds later, the prawns were served on a mound of crushed ice, heads intact and very much alive.

It was among the most unsettling experiences I have ever had in a restaurant: preparing to bite into a living creature as it glared back into my eyes. Antennae whipping in wild circles, legs churning, body contorting to power the spinnerets that had been so rudely ripped from its torso, at that moment the prawn was less a foodstuff than a creature that clearly did not want to be eaten.

I have consumed thousands of animals in my lifetime; I’ve seen lambs butchered, snipped the faces off innumerable soft-shell crabs, killed and gutted my share of fish. I had, I thought, come to terms with the element of predation inherent in eating meat—and I am thankful to the beasts that have nourished me. But this was the first time I had ever faced one of nature’s most basic postulates: You live, your prey dies. In order to eat, you must first rip into living flesh. Not by proxy, not from a distance, not with a gun or knife but intimately, with your teeth. I thought about the Hindu cabbie who had driven me back into town from a Singapore seafood restaurant years ago, lecturing me the entire way on the spirituality inherent in a single prawn, and I thought about my vegan friends who refuse to eat anything that once had a face.

I bit into the animal, devouring all of its sweetness in one mouthful, and felt the rush of life pass from its body into mine in the sudden relaxation of its feelers, in the blankness I swear I could see overtaking its eyes. It was weird and primal and breathtakingly good, and I don’t want to do it again.