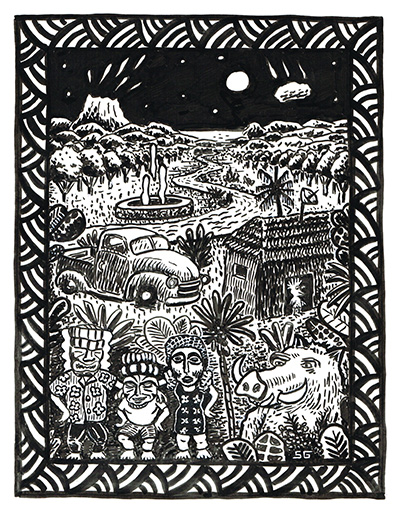 Once, in the Macnuts
by Emma Demorest
Illustrated by Steven Gavenas

They said the big rock came from outer space.

They said one night in the ’70s Auntie Em woke up in a hair net to rumblings. Uncle Sho went out looking, and the boys went too. They said where it sat was where it landed—square center of the biggest macnut orchard on the property. They said they could hear it hiss, like the inside of a teapot, and that the earth all around was pulsing with heat, you could see it, yellow and orange in the dirt. Eventually they went back inside, and I guess no one bothered with it after that.

We load up in the truck every new year. It’s the same truck that saw the big rock land, you can tell by the chunks of missing seat cushion, the rust in the bed. Uncle Sho starts the engine at least five times and makes a joke that it’s ’cause of all us kids in the back. Every year. We tear through the back orchard. The way is bumpy—there’s never any road, the jungle soaks up any traces of us it finds. I always liked that. On the way we make bets on who can see a wild pig—we’re too boisterous, no one ever does.

We get to the macnut orchard and Uncle Sho stops the truck and we stop and we listen to the story we’ve already heard, but we’ve grown welcome to the repetition. And we jump out the back and press our hands to the big rock and some of us say we can still feel the heat that it came with, but some of us are liars.

Em and Sho’s little house smells like mildew, but so does everything and we’ve come to like it. Nothing here is made of just one piece, the roof collects itself in rusty tin slabs, the chicken hutch is a frankenstein of wooden extras. The house is the same, and the chickens walk freely into that, too.

We love the swing set, sagging rope, and squishy wood that still supports us, slow in decay, but it suits it. We run barefoot in the gully and throw rotten guavas into the stream. We want to drink the stream looking bubbly and soft like that, but Auntie says no. Auntie never liked a good time.

We snack on rum cake that makes our fingers sticky and sweet bread that’s supposed to be saved for later. More aunties and uncles tell us how big we are, and we believe them. The uncles watch the pit and when the air starts smelling rich and murky like that they move the tea leaves and it rises from the Earth, big and funny looking, but we’re hungry.

Everyone grabs everyone’s hands and we stand in a big circle, Auntie says a prayer in the way I always wish I could, I hope someday she’ll teach me.

I know it’s not an asteroid, I know Pele placed it there before any macnuts even thought to grow. But next year, when the car doesn’t start and we look for pigs and the truck is bumpy and we’ll listen to Uncle’s story about the big rock, I’ll believe it.