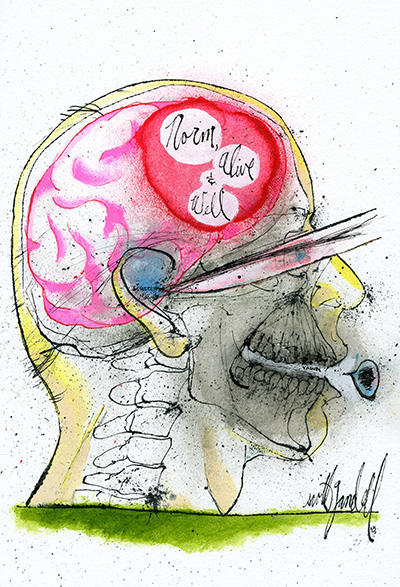 He walked all the way home like that, the full three miles back from The Lucky Pub, with a knife hanging out of his eye. It didn’t hurt, not even itched, and without reference of a mirror Norm strutted like he was tiptop. It was night out, he was full of beer, and of course he had tunnel vision.

At the house he politely knocked before entering the bathroom where his wife, Billie, was up to her neck in bubbles.

Billie’s voice plummeted. “What is THAT?”

It was the first time Norm had been confronted with his new reflection. In the fog of bathroom heat was the full shape of the wound—a sliver of red on either end of the wood-handled object responsible. He felt the chill of terror; then pride. He recalled how he’d been in a fight with Sal Vate—they all called him Sally—and the tumble of fists that segued into the floor getting jerked out from under him, the ceiling suddenly becoming a surface not too unreasonable a place to walk on.

Then one big memory blank. Why they even got to fighting in the first place, Norm couldn’t tell you. This he’d attributed to having too much to drink.

Norm inspected the damage head on, then sideways. “Well that explains it,” Norm said. “Would you look at that.”

Before bed Norm took great caution to ensure he’d sleep the whole night through on his back. He bunched up extra pillows on both sides of him to keep from rolling, even laid out a towel under his head in case this thing ever decided to bleed—which up to this point had somehow withheld all blood. When Billie saw just what his plan was, she barked, “Oh sure just take all the pillows for yourself.” I guess no one ought to suffer in this matter, Norm thought, so he opened the closet and removed the folded spare blanket and went off to the couch.

His dreams only slightly varied that night. And in the morning he was unsure if this was due to the knife or the sofa he’d slept on. He’d woken freezing cold, dripping sweat, the spare blanket kicked off and both his arms hugged tight to his chest.

After breakfast, Norm made up his mind over his second cup of coffee. He decided to call in sick. Billie didn’t have to report to the restaurant till late that afternoon, but she took the day off too. Given the tightness of their funds, and the stillness of their lives, they decided it was paramount to figure this whole matter out in no hasty fashion.

“And you’re sure your head doesn’t hurt,” Billie said. She was consulting the yellowy pages of Schluts and Hansard Medical Reference, the tome she’d picked up at the library.

“Not any more than it usually does,” Norm said.

“Out the eye that doesn’t have anything in it.”

“Ask me how many fingers you’re holding up or something.”

“No. I don’t believe you that it doesn’t hurt.”

“I already told you it doesn’t hurt any more than usual.”

“A headache that comes and goes.”

“And your head hurts just as regular as always?” Billie said. She knew how Norm liked to play the tough guy.

But the one helpful fact Norm and Billie managed to glean from the Schluts and Hansard Medical Reference had to do with sleep. It was a bad idea for someone with a head injury partake in the act.

“But it’s not a head injury,” Norm protested. “It’s an eye injury.”

Billie spent a good chunk of the afternoon reading aloud from the book to Norm. She was telling him how with even just the slightest bump on their head men closed their eyes for two seconds too long and were forever shut in a coma. Norm sat politely across the breakfast table, nodding. But her words had long ceased registering. Instead he was hung up on that dream of his. What had made it so unusual was the way in which the entire dream, like never before, had played out in reverse. For Norm, dreams were reliable, as assured a thing as rocks dropping off a ledge. Into the still air of a linear downward path his subconscious would plunge, and in the morning he would wake knowing the exact place he’d arrived from; as simple as looking up. But last night Norm had dreamt he was climbing out of a well only to discover he’d been climbing deeper into it all along. And just before he woke up shivering in his own sweat, he commenced falling upwards, unable to comprehend the most basic aspects of life.

And it really wasn’t. Norm had, a little earlier, discovered every time he opened his mouth to its widest he could actually feel the knife lodged there. And the more he did it the more he realized he was actually capable of moving the blade just a fraction of a millimeter’s distance from the inside. Not in an entirely painful way either. In fact, Norm had taken to doing that every now and again at a rate of which the frequency wasn’t diminishing. No one told him men were capable of scratching behind their eye, or maybe it was at the front of the brain.

“If you’re not yawning what are you doing?”

“I guess you’d have to have a knife in your eye to understand.”

“I’m not yawning. You know, I feel more awake every time I do it.”

“Where are you going?”

Norm threw open the door. Their heater was out and the chill in the air warmed him. The noise of traffic—they lived ground level in an apartment on a busy street—blustered through. In his nostrils was the thick smell of fuel, sweeter than rosemary. The blare of Billie’s screaming swam in the air and it was December and Norm was forty-seven. He felt his whole life before him like a knobby frozen creek melting in the sun.

“You’ll get sick!” Billie was yelling, the brick of Schluts and Hansard pinning her to the sofa. “You’re not wearing any shoes for chrissake!”

“If you walk out that door,” Billie said. And then: “Norm, sweetheart, you’re bleeding.”

“Tell me you love me. Isn’t it beautiful outside?”

“Stay right there. I’ll be back with champagne.”

The next morning they found him covered in birds, the cause of death, of course, obvious to everyone.